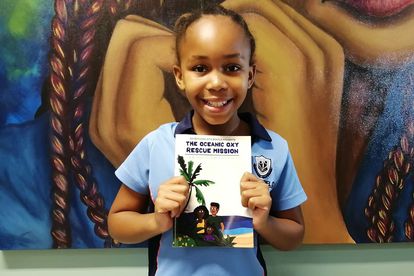 Young Bontle Ndhlovu has always had big plans and in late 2021, it was time for the world to listen because this incredible eight-year-old had a story to tell.

Bontle was inspired to write her own story after watching an episode of the CBeebies original animation series The Octonauts. The series’ team of little undersea explorers are always ready to dive into action and rescue amazing sea creatures.

Coupled with her love for animals and passion for sea animal rescue, Bontle decided to write her own rescue story, titled The Oceanic Oxy Rescue Mission.

When Bontle had her ducks in a row, she asked her mother, Refilwe, to help her in writing the story down as she was only seven at the time. After Refilwe typed her daughter’s story for her, she sent it off to her colleague Maxine Naidoo, who is an illustrator.

The Oceanic Oxy Rescue Mission tells the story of Nyla and her family, who, while out on a boat ride one day, are attacked by three sharks. Oxy the Octopus and his dolphin friends come to their rescue in a touching story of adventure and love.

“I think children should read it because it’s cool and full of imagination. There are also some fun educational activities at the end of the book,” Bontle told IOL.

Bontle credits mother for love of books and stories

According to IOL, Bontle says her mother started reading stories to her when she was very young, which has sparked her love of reading and telling stories.

Her mother goes on to explain that when the two of them were visiting bookstores, Bontle would often ask if her books could one day be on the shelves.

“One day, my mom and I were in a bookstore, and I asked her if it was possible for my books to be sold in the shop. She said ‘yes’, only if you tell your own stories”.

The young storyteller who is in Grade 3, further explains that “writing and publishing my book taught me that anything is possible”

Bontle wants to inspire others with her own stories. She wants children to know that if they work hard, they can achieve anything. She encourages everyone — young and old — to follow their dreams and never stop believing in the impossible.

While in the process of publishing her first book, Bontle was also selected as a local role model for H&M in their global Role Models Campaign, an initiative aimed at empowering young voices.

Bontle also loves languages, she speaks both English and Sepedi and is an avid swimmer, singer, and dancer.

What is next for this inspiring young author

Even though she is only in Grade 3, Bontle is already busy working on her next project — a series titled Adventures with Bontle, which will be published later this year.

The Oceanic Oxy Rescue Mission (R90) by Bontle Ndhlovu can be ordered from www.refilwern.com or www.ethnikids.africa.

Matric results 2022: What next for South Africa’s top student?