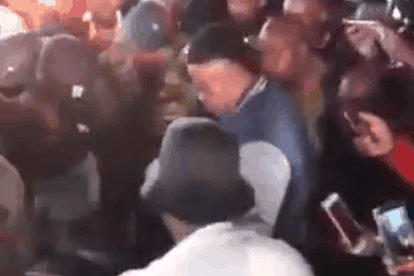 Oh dear. Just when you need your fans the most, they let you down – in every sense of the term. AKA came off a little worse for wear this weekend during a performance in Rustenburg. His decision to go crowd-surfing has left South Africans sniggering behind their screens on Monday.

The Supa Mega was buoyed by the intimate atmosphere, and his fans made a lot of noise for the hip-hop superstar. The lad was on fire as his set continued into the night. After whipping the excited gig-goers into a frenzy, he decided to give them a little bit more… but no one was well equipped to handle it.

AKA approaches the front of the stage, turns his back to the front row, and throws himself towards his adoring public. However, these guys weren’t in the business of heavy lifting. They instead parted like the Red Sea, barely breaking the rapper’s fall as he hit the floor.

Forever the consumate professional, AKA continued to perform… even while he was flat-out on the concrete. The show must go on, as they say – and the Fela in Versace singer (or, more like “Fell-a in Versace, eh?) gave his fans what they wanted. Even if the favour wasn’t reciprocated just moments beforehand.

How has AKA taken it?

Now, AKA hasn’t officially responded to what happened – he’s probably aware that this will be good meme material for the next few weeks – but he did retweet a post from one of his followers. Allegedly, AKA made another crowd-surfing attempt. It seems like he was second time lucky…

Yep, and crowd surfed for the second time. He was caught though, but of course Twitter won’t show you ? https://t.co/qGV88JV6Qn

Strangely enough, this isn’t the first time the musician has endured this type of mishap. Two years ago, he attempted a stage dive that also went wrong during another lit performance. Clearly, no lessons have been learned.