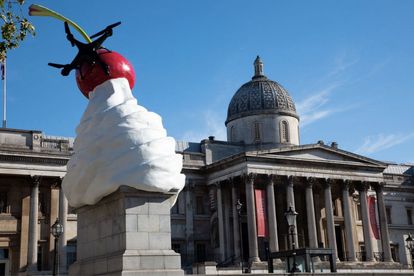 Four artists have been shortlisted for Britain’s Turner Prize for contemporary art including Heather Phillipson, best known for her artwork displayed in London’s Trafalgar Square of a giant swirl of replica whipped cream, topped with a sculpted cherry. Image via Twitter @tateliverpool

Four artists have been shortlisted for Britain’s Turner Prize for contemporary art including Heather Phillipson, best known for her artwork displayed in London’s Trafalgar Square of a giant swirl of replica whipped cream, topped with a sculpted cherry. Image via Twitter @tateliverpool

Four artists commended for their solo exhibitions are competing for the UK’s Turner Prize for contemporary art this year, Tate Britain, which organises the award, announced on Tuesday.

This year’s nominees include Heather Phillipson, best known in Britain for her artwork displayed in London’s Trafalgar Square of a giant swirl of replica whipped cream, topped with a sculpted cherry, fly and drone.

Titled The End, it sat for two years from January 2020 on the empty fourth plinth on the world-famous landmark in the centre of the British capital.

Phillipson, who works in video, sculpture and drawing, was nominated for that work and a solo exhibition – Rupture No 1: blowtorching the bitten peach – at Tate Britain.

The prize’s jury “applauded the audacious and sophisticated way Phillipson splices absurdity, tragedy and imagination to probe urgent and complex ideas,” the museum said in a statement.

The other contenders include Toronto-born, London-based artist Sin Wai Kin – formerly known as Victoria Sin, who identifies as non-binary – in part for a solo show at Hong Kong’s Blindspot Gallery.

“Drawing on their own experience existing between binary categories, their work realises fictional narratives to describe lived realities of desire, identification, and consciousness,” Tate Britain said.

THE OTHER TWO ARTISTS NOMINATED FOR A TURNER PRIZE

Ingrid Pollard, who works primarily in photography, but also in sculpture, film and sound, was nominated for her exhibition Carbon Slowly Turning in Milton Keynes, central England.

“Pollard’s work questions our relationship with the natural world and interrogates ideas such as Britishness, race and sexuality,” Tate Britain said.

The jury also selected Veronica Ryan, a Montserrat-born British sculptor, for two UK showcases of her “sculptural objects and installations using containers, compartments, and combinations of natural and fabricated forms”.

“Art has provided much-needed enjoyment and escape over the past year, but it has also helped to reconnect us with each other and the world around us, as the practices of the four shortlisted artists variously exemplify,” he said.

TURNER PRIZE NOMINEES WILL HAVE A JOINT EXHIBITION IN OCTOBER

Over the years, the prize has courted headlines because of installations including an unmade bed and works made from elephant dung and human hair.

In 2019, the four shortlisted artists sent a plea to judges to award the prize to them all jointly, explaining they had formed a collective to show solidarity at a time of global “political crisis”, including Brexit.