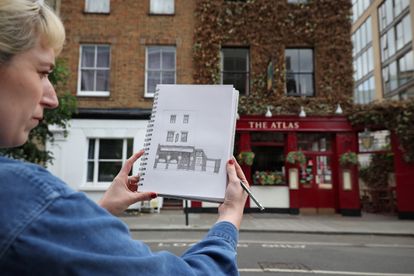 Artist Lydia Wood holds up her partially finished drawing of The Atlas pub in west London on 26 May, 2022. – The 28-year-old artist has built up a TikTok and Instagram following with her detailed sketches of well-loved London pubs and has set an ambitious — but she thinks, not impossible — goal of drawing all 3 500 of them. Photo: ADRIAN DENNIS / AFP

Artist Lydia Wood holds up her partially finished drawing of The Atlas pub in west London on 26 May, 2022. – The 28-year-old artist has built up a TikTok and Instagram following with her detailed sketches of well-loved London pubs and has set an ambitious — but she thinks, not impossible — goal of drawing all 3 500 of them. Photo: ADRIAN DENNIS / AFP

Lydia Wood sits opposite The Atlas pub in west London, meticulously adding detail to her drawing of the building and pausing only occasionally to sharpen her pencil.

The 28-year-old artist has built up a sizeable TikTok and Instagram following with her detailed sketches of well-loved London pubs.

She has set an ambitious but, she thinks, not impossible, goal — drawing all 3 500 of them.

So far she has managed “a few hundred”, many of them near to her home in Catford, southeast London, she told AFP.

The project came about during the coronavirus pandemic when lockdown meant she was unable to work providing children’s after-school art classes.

ALSO READ: WHO urges mental health action for all nations

“It did kind of stem from just being, you know, a pub person, like that’s where I socialise with my friends,”

Wood’s drawings get thousands of likes on Instagram and TikTok, where she posts short videos about the process, then holds up the finished sketch in front of the pub.

The freelance artist had always drawn some pictures of pubs to sell at Christmas markets.

But when she announced her plan and asked for commissions to draw the capital’s pubs, “things went a little bit crazy”, she admitted.

Now creating art is her full-time job, mostly carrying out individual commissions, including pubs and houses.

She also sells prints on the e-commerce craft site Etsy.

“They feel so quintessentially British. I think that whether you’re a pub person or not, they’re great buildings to look at or be in.”

The Atlas pub, near Earl’s Court, was suggested by a TikTok follower and sits on a quiet side street near a leafy cemetery.

But Wood still has to put up with screeching ambulances driving past and a plumber’s van unhelpfully parking in front of the building.

Some publicans have given her a hearty welcome when they realised she was drawing their buildings.

But The Atlas, its bricks painted glossy red and the upper walls covered with creeper vines, is closed until late afternoon.

Inside, the Victorian-era pub has lovingly preserved period features such as wooden panelling.

It is now a “foodie” pub serving dishes such as risotto or confit leg of duck for dinner.

“It looks quite posh,” said Wood.

While she does not see the project as an excuse for a pub crawl, she likes to go into the places she sketches to get a sense of their vibe.

A “local” with regular drinkers has a completely different atmosphere from a central London pub with its transient passing trade.

“When I’ve been inside a pub after I’ve drawn it, there’s definitely a different kind of feeling of ‘oh yeah I know that pub and I can recommend it to someone’.”

A few days later, Wood is in busy Soho to draw a very different pub, The Coach and Horses on Greek Street, which she has been into before.

“When you’ve been inside the pub you kind of have a connection to it,”

She chose the pub because a commentator on one of her TikTok videos told her of a family connection to the pub.

Their grandfather, Norman Balon, was famously known as “London’s rudest landlord” and ran the pub for more than 60 years.

“I loved that sort of anecdote,” “It immediately drew me towards it.”

The central London pub in a historic 19th-century building has had a colourful clientele, including journalists from satirical magazine Private Eye.

Other regulars included the legendary alcoholic newspaper columnist Jeffrey Bernard, who was immortalised in a Keith Waterhouse play “Jeffrey Bernard Is Unwell”.

It is now managed by a brewery chain.

On a Saturday afternoon, there is a constant stream of passers-by and drinkers sit with pints outside.

“That took nearly three hours,” she said of her finished drawing of an “iconic part of Soho”.

“It’s funny — there are so many people around, but actually it felt quite a peaceful drawing.”

Carol Bouwer is an active director of 24 companies, CIPC reports