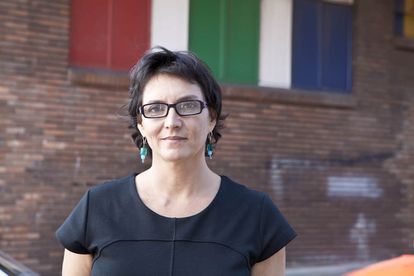 Mayfair is a tough, taut, multicultural gangster thriller set in a suburb defined as “Indian” by the architects of apartheid, Mayfair in Johannesburg.

Blecher, 51, told me the film was an idea that came from two producer friends of hers.

“It’s a thriller about Asians and Somalians in the melting pot of immigrants from across Africa living in Johannesburg. It’s as far away as you could get from me, a white, Jewish, middle-aged woman who lives in Emmarentia.”

Married to a man who’s not in the film industry, they have three children and she travels a lot from film festival to film festival, winning prizes as she goes.

The story of Mayfair is about Zaid, an international aid worker, who is fired from his job overseas at a refugee camp. Zaid returns home to Mayfair, where his overbearing father Aziz (Rajesh Gopie), a complex businessman and occasional money launderer, is facing death threats. Zaid has reluctantly to involve himself in his father’s affairs.

The leading man playing Zaid is actually a British Asian actor born in Kenya called Ronak Patani. He says that perfecting the Joburg Indian accent was one of the greatest challenges of his role.

“I prepared as much as I could but when we got to rehearsals it was terrible, so we went old school. We visited Mayfair, the mosque in Linden, the bakeries in Emmarentia, chatted with guys in shops, and got some chow from the Oriental Plaza. A few days later when we were reading the script with the whole cast, Ilse Klink – who plays Shanaz, my mum – asked me whereabouts in Jozi I was from. Nailed it!”

On working with Blecher and the cast and crew, Patani says they were all lucky to have a director who knows her stuff back to front.

“She convinced us about her vision for the film, and then let us all get on with the job, throwing in a few ideas every now and then.”

Born in the Gauteng region, Blecher is very much part of the Afro-cultural hub. Her last film at the London Film Festival was Ayanda, about a young woman, played by SATV soap actress Fulu Mugovhani (Scandal), who inherits a rundown old garage in Yeoville from her Nigerian father. The film before Ayanda, Otelo Burning, was a moving tale of love, betrayal and courage set in apartheid times when three Zulu boys escape their tough life in Lamontville Township, Durban, to discover surfing as a way out.

It was her first feature film, having made numerous drama series for SABC and documentaries.  She won the Safta award for best director in 2016 for her film Dis ek, Anna (It’s Me, Anna), starring Marius Weyers.

Her next film in the pipeline is about Dr James Barry, the woman who lived her life as a man and became the first surgeon in the world to successfully perform a caesarian operation. Dr Barry was also the person the governor of the Cape, Lord Charles Somerset fell in love with. In the early 1800s, that was one huge scandal. Wait for the film for more!

Mayfair is screening at NFT2 on Friday 19 October at 18.15 and at Rich Mix in Shoreditch on Sunday 21st at 15.30.  Festival programme and tickets available here.