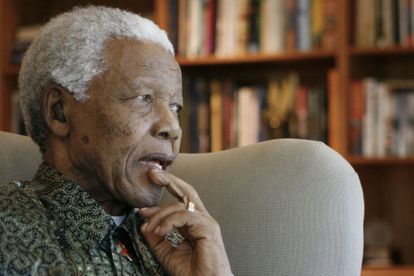 An NFT of Nelson Mandela’s arrest warrant from 1961 will be auctioned in Cape Town. Image via Twitter @NelsonMandela

An NFT of Nelson Mandela’s arrest warrant from 1961 will be auctioned in Cape Town. Image via Twitter @NelsonMandela

An NFT version of a 61-year-old arrest warrant for anti-apartheid icon Nelson Mandela will be auctioned off at the weekend in Cape Town, a South African digital auctioneer said on Wednesday.

“A digital version of the original 1961 Warrant of Arrest for Nelson Mandela has been specially minted and will be available 61 years after it was first issued,” the start-up auctioneer firm Momint announced in a statement.

Selling art as non-fungible tokens, or NFTs uses the same technology as crypto-currencies such as Bitcoin. The buyer receives a verified digital token, which proves the artwork is an original.

“The warrant for treason is an exceptionally valuable NFT,” it said.

South Africa’s first democratic, black president had been arrested on 5 August 1962, in the southeastern KwaZulu-Natal province.

After the 1963 Rivonia treason trial that followed, he was jailed on Robben Island prison off Cape Town for much of his 27-year incarceration.

The original document, dated 1961, now yellowed, with gnarled edges and bearing staple holes on one side, is handwritten in both English and Afrikaans.

It is being kept at the Liliesleaf Farm heritage site in northern Johannesburg, which will receive proceeds from the sale.

Between 1961 and 1963, the landmark farm served as the secret headquarters and nerve centre of the then banned African National Congress (ANC), which led the fight against white-minority rule.

Mandela hid there for sometime under the guise of a farm worker. Now a museum, the farm shuttered its doors in September 2021 due to financial difficulties.

ONLY ONE COPY OF NELSON MANDELA’S ARREST WARRANT

The document was a request made by the prosecution to a judge, who had the sole authority to issue a formal arrest warrant.

“As far as we know, that was what they used to arrest Nelson Mandela,” said Nicholas Wolpe, Liliesleaf’s foundation director, adding it is the only copy known to exist.