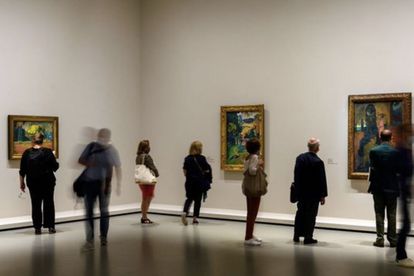 The return of the Morozov art collection has been complicated with disruption to air travel between France and Russia. Image via Twitter @artmarketdotcom

The return of the Morozov art collection has been complicated with disruption to air travel between France and Russia. Image via Twitter @artmarketdotcom

Russia’s ambassador to France warned on Tuesday that disruption to air travel could complicate the return of dozens of prized artworks currently on display at a popular show in Paris, as Moscow’s war on Ukraine rages.

Calls to seize Russian goods abroad have increased as Moscow pursues its bombardments, in particular those belonging to associates of President Vladimir Putin.

The modern art masterpieces being shown at the Louis Vuitton Foundation are from the Morozov Collection, amassed as the 20th century dawned by two brothers of a textile and trading dynasty.

But widespread cancellations of flights between France and Russia and disputed road traffic as the Ukraine fighting continues means their return could prove difficult.

SUSPENSION OF FLIGHTS TO RUSSIA COMPLICATES RETURN OF MOROZOV COLLECTION

“It’s no secret that in the current situation, with all the drastic measures that have been taken, for example, the suspension of flights between Russia and France, that problems have emerged,” Russia’s envoy Alexei Mechkov told journalists.

“We’re currently working on the logistical questions to ensure the most secure return possible for this collection to Russia,” he said.

The Louis Vuitton Foundation, created by the billionaire founder of the LVMH fashion conglomerate, has already said that “as with all major loans of artworks, the collection is covered by an exemption from seizure clause.”

It organised the Morozov show in partnership with the State Hermitage Museum in Saint Petersburg and the Pushkin State Museum and State Tretyakov Gallery, both in Moscow.

More than one million visitors had seen the show as of end-February, close to the record 1.29 million people who visited another Louis Vuitton show of works from a major Russian collection, Sergei Shchukin, in 2016-2017.

The show includes works by major Russian artists as well paintings by French masters including Monet, Cezanne and Gaugin.