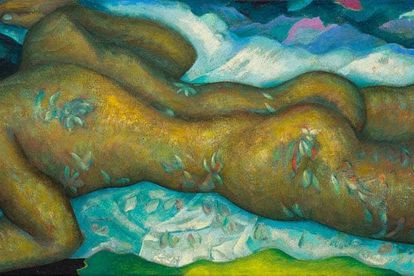 The works are a Sydney Kumalo bronze from the sculptor’s golden period and Alexis Preller’s transformative study of a wounded soldier.

Sydney Kumalo’s Madala VI (estimate R700 000 – 900 000) is a large and very rare example from this acclaimed sculptor’s important Madala (old man) series. In 1966, Kumalo began work on a series of sculptures with this as his theme. He produced eight distinctive figures and only cast a single edition of Madala VI, which the present owner acquired from art dealer Egon Guenther in 1967.

Great anticipation surrounds Alexis Preller’s Fleurs du Mal (estimate R4-6 million), one of three important Preller lots on offer. First exhibited in 1946, two years after it was painted, this iconic work was, until very recently, thought lost in a fire. Bidding for works by Preller have been intense at recent Strauss & Co sales and there is great anticipation around this lot.

Frequently referred to by art historian Esmé Berman in her public lectures, Fleurs du Mal depicts an androgynous figure whose war wounds are transmuted by the painter into butterflies and flowers.

The work was a direct response to Preller’s experiences as a stretcher-bearer and medic in World War Two. Artist Karel Nel, a noted Preller expert, describes this important painting as a “striking record of Preller’s ability as an artist to process significant moments in a highly personalised manner”.

Strauss & Co is delighted also to offer Preller’s Flower King (estimate R2.5-3.5 million), a handsome allegorical portrait from 1968 that was included on the artist’s 1972 retrospective at the Pretoria Art Museum.

Irma Stern has been a bulwark of Strauss & Co auctions since 2009. She is represented on the sale by two important floral still lifes: Still Life with Fruit, Urn and Pot (estimate R2-3 million), painted in 1948, and the earlier work, Still Life with Poinsettias (estimate R4-6 million).

Painted in 1934, Still Life with Poinsettias is of particular historical significance in Stern’s oeuvre as it was exhibited at the 1936 Empire Exhibition in Johannesburg, an important turning point in Stern’s professional career.

Stern’s portraiture is highly esteemed. In May 2016, Strauss & Co sold Portrait of Freda Feldman in a Basuto Hat for R5 115 600. The work is one of three portraits from 1943 depicting the artist’s friend and patron, Freda Feldman. Strauss & Co’s is thrilled to be offering the other two portraits: Freda in Khaki Dress (estimate R3-5 million) and Freda with Roses (estimate R3-5 million).

A gregarious study of street life, Gerard Sekoto’s Women in the Country (estimate R2.5-3.5 million) dates from the two-year period between  the painter’s arrival in Eastwood, Pretoria, and his departure for France  in 1947.

Paintings from this period represent the pinnacle of Sekoto’s artistic career and are highly prized. The Pink Road (estimate R1-1.5 million) is an earlier example of Sekoto’s understated way of witnessing and comes from his important Sophiatown period (1939-42).

There has been robust interest in unique pieces by Kentridge at Strauss & Co auctions and there is justifiable excitement around the lot Drawing for ‘Íl Sole 24 Ore’ (estimate R1.8-2.4 million). This large Kentridge drawing, part of a series commissioned by the Italian financial paper Il Sole 24 Ore, references particular moments in Italian cultural and political history.

Strauss & Co’s Johannesburg summer sale at the Wanderers Club is preceded by an extensive calendar of media and social events. www.straussart.co.za

Powerball and Powerball Plus results for Friday, 22 July 2022