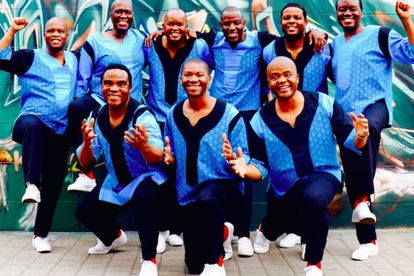 Ladysmith Black Mambazo is one of the world’s greatest and most distinctive vocal groups. For 60 years, the legendary a cappella male choir have invoked the soul of South Africa with their intricate rhythms and harmonies and powerful, uplifting songs.

They shot to global stardom after featuring on Paul Simon’s Graceland album and have been touring the world ever since, and have won five Grammy Awards.

The tour in 2020 was to include performances that would celebrate the life and music of Joseph Shabalala, the founder of Ladysmith Black Mambazo.

When Joseph formed the group that became Ladysmith Black Mambazo, 60 years ago, he had a dream of a South Africa living in harmony. For all his life he created beautiful vocal music that came to speak to the whole world with a call for peace and love. Joseph retired in 2014 and handed leadership of Ladysmith Black Mambazo to his four sons Thulani, Msizi, Sibongiseni and Thamsanqa, who carry Joseph’s message into the future.

Muntu Valdo was scheduled to open for the group on this tour. Cameroon-born Muntu Valdo’s music is rooted in the blues, mixing African traditions with striking modernity and technical mastery.

He has travelled all over the world, supported and played alongside some of the great names of African and international music including, Manu Dibango, Ali Farka Touré, Damon Albarn, Richard Bona, Boubacar Traoré and Lucinda Williams just to name a few.

Due to the recent worldwide pandemic, all shows have been moved to May/June 2021. The tour will continue as originally planned, and all tickets remain valid.

More shows will be added closer to the time. To purchase tickets to the 2021 tour, please click here.

‘With their cheeky scissor-kicks, Ladysmith Black Mambazo were pretty spry for a 60-year-old choral group. Their line-up has evolved but the South Africans’ close-knit harmonies are just as faultless as they were on Paul Simon’s Graceland, which brought them international fame.’ (★★★★☆ Telegraph)

‘Though they sing entirely a cappella, their songs have a rhythmic spring, and their dance moves are light-footed and elegant’ (Daily Telegraph)

‘It’s not just their sound but their look and their athleticism. They bounded on, promising an evening of “peace, love and harmony” from South Africa to the world and surely no one failed to pick up the joyous vibes as they sang and joshed with one another, and the audience.’ (★★★★☆ theartsdesk)

‘Sensitive guitar playing and a dreamy, voice with distinctively textured, self-created loops and rhythms. A compelling live sound with an airy, poetic feel that’s a bit Brazilian, a bit Cape Verdean, while keeping a toe in the world of international busking folk’ (Telegraph)