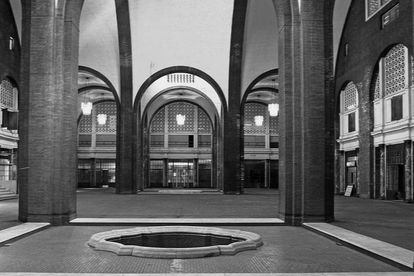 Take a look at one of Johannesburg’s long-lost gems; The 1930’s Park Station concourse.

Even though the 1930’s Park Station concourse is adjacent to one of the busiest railways in Southern Africa, it might as well not exist as it is completely out of view from the public eye.

While many are curious as to where exactly this part of the station is, Derek Smith actually explored the semi-abandoned space (which is sometimes still reportedly used for functions) and shared his photos and live journal post on Flickr:

History: Park Station went through a number of reinventions over the years. The station was originally named Park Halt, and became “the pinnacle of passenger transport in Africa” before the advent of air transport, writes In Your Pocket.

In 1897, traffic grew and expansions were called upon. The Mail and Guardian reported that in 1897 a beautiful 154 m-long steel and glass structure – imported from Holland – was installed and used until the late 1920’s. This structure currently sits west of the Nelson Mandela Bridge on an empty lot at the edge of Newtown as some Joburgers might recall.

Then came architect, Gordon Leith. After the city desperately needed a new station in 1926 (in order to be “more in line with the city’s emergence as the gold capital of the world“) Leith was instructed to “fix it up”. The concourse ultimately opened in 1932, and “boasted eight platforms and four approach tracks and saw traffic of some 16-million passengers each year,” writes Nechama Brodie for the Mail and Guardian.

The work of J. H. Pierneef also contributed to the “exciting flavor of the space”, and passengers could admire the “stunning intersecting barrel vaults and lantern clerestories which rise up nearly fifteen meters above the floor level in a controlled explosion of public space,” reports artefacts.co.za.

“It has the most beautiful wood paneled walls, art deco and delft tiles,” Derek Smith

There are thousands of beautiful hand-painted tiles in the original tearoom and bar:

Between 1951 and 1954 Park Station was redeveloped – yet again. Platforms and tracks were reportedly lowered by 4 m so that passenger concourses could be built above them and new tracks were added.

During the 1990’s the concourse was sealed off when Nelson Mandela launched a new station concept – “an integrated commuter/retail space known as Park City”.