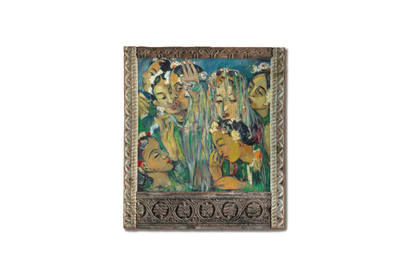 In the art world, the emergence of a new Irma Stern for sale always sends ripples of anticipation and excitement through the vast audience of impassioned followers. Some are more beautiful than others, and this is considered a good example from her ‘Zanzibar Period.’
Bonhams has sold many works from Irma Stern’s Zanzibar period, including Arab Priest, which achieved £3 million in 2011, setting a world auction record for a painting by Stern and making it the most valuable South African painting ever sold at auction. The work was acquired by the Qatar Museums Authority and is part of the collection of the Orientalist Museum in Doha, Qatar.

Bonhams Director of African Art, Giles Peppiatt, said “’Lelemana Dance is a remarkable work and shows Irma Stern at her very best. It conveys the deep spirituality that the artist found among the Arab people during her trips to Zanzibar and which she so admired. The painting seems both joyful and melancholic – capturing the often-mixed emotions experienced during rites of passage. As one moves from one stage of life to another a wistfulness for times gone by often seems to permeate the joy of new beginnings. Stern has shown this in a way that only a master painter can.”

This painting was so well regarded, that it was purchased by a private collector almost as soon as it was executed in 1945. Therefore, it did not feature in the exhibitions she organised later in 1946 or 1947. The painting was first exhibited publicly in February 1962 at the Lidchi Gallery, Johannesburg where it was snapped up by another private collector, in whose collection it has remained ever since.

Stern’s own regard for Lelemana Dance is evident. It was among the 25 oils paintings she chose to illustrate her 1948 publication, ‘Zanzibar’ where it stands out as one of the most accomplished, well deserving of its position alongside Stern’s masterpieces, The Arab Priest, Arab with Dagger and The Golden Shawl.

A HOST OF OTHER CONTEMPORARY AFRICAN ART ON SALE

Register for the auction: here