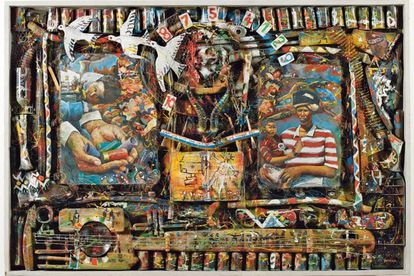 South Africa: the art of a nation takes viewers on a journey from the earliest examples of human creativity in the form of rock art, right through to South Africa’s cutting-edge contemporary works.

The exhibition at the British Museum, which runs from 27 October to 26 February 2017, features a diverse range of art from across the ages, telling a story that stretches back 100,000 years.

Starting with some of the first artistic stirrings of our ancestors, the exhibition then moves to iconic pre-colonial sculptures, and then on to colonial art from the 16th century onward. These pieces are influenced by the Dutch, British, Malay, Chinese and Indian as well as the various conflicts that transpired.

It further features highly charged 20th-century works that respond to segregation and apartheid, and pieces that showcase the post-apartheid transformation of the nation since 1990.

One of the oldest objects on display will be a 77,000-year-old shell bead necklace, which was discovered at Blombos cave in the Western Cape. This discovery in 2002 repositioned southern Africa, as opposed to Europe, as one of the earliest sites of artistic thought.

An artwork entitled ‘Potent Fields’ by Karel Nel features alongside the shell bead neckalce. The piece of art, consisting of two planes of red and white ochre, was created in the same year as the discovery and is therefore strategically positioned alongside it to provide a different perspective for the viewer.

Nel collected the ochre in Nelson Mandela’s ancestral lands in the Eastern Cape, and the piece intends to echo the colour divide of apartheid.

The most iconic object on display will be the 800-year-old golden rhinoceros of Mapungubwe, one of Africa’s great treasures. The object, along with three others, will be leaving the continent for the first time to feature in this exhibition.

Along with the rhinoceros, the museum is borrowing other golden figures of animals of high status, including a cow and a wild cat, as well as objects associated with power – a golden sceptre and golden bowl.

These gold figures were discovered in three royal graves in Mapungubwe, which is known as the capital of the first kingdom in southern Africa.

According to the Guardian, the curator of those gold objects has called them “Africa’s crown jewels”.

These gold treasures will be displayed alongside a modern artwork by Penny Siopis and a sculpture by Owen Ndou. These modern works will challenge the viewer’s assumptions of the colonial and apartheid eras.

The exhibition will feature a contemporary collaborative piece from Bethesda Arts Centre, made by San|Bushmen and Khoekhoen artists, descendants of South Africa’s first peoples. The piece, made in 2015, is a two-metre wide textile entitled The Creation of the Sun.

South Africa: the art of a nation allows viewers to celebrate the artistic accomplishments of the many people who contributed to the South African story over the past 100,000 years.

The exhibition is sponsored by Jack and Betsy Ryan and the exhibition’s logistics partner, responsible for flying over some of the loans from southern Africa, is IAG Cargo.