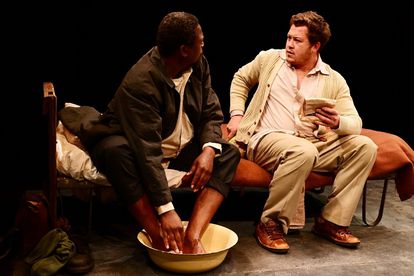 Athol Fugard’s ‘Blood Knot’ – which first premiered 61 years ago – is still relevant today as it tackles themes of brotherhood and hope. Image Supplied

Athol Fugard’s ‘Blood Knot’ – which first premiered 61 years ago – is still relevant today as it tackles themes of brotherhood and hope. Image Supplied

Following its sold-out success at The Market Theatre, South African theatre legend, Athol Fugard’s acclaimed play, Blood Knot, transfers to The Baxter for a limited season from 11 to 28 May 2022 at 19:30, with Saturday matinees at 14:30.

The multi-award-winning cast and creative team are led by James Ngcobo who directs Mncedisi Shabangu and Francois Jacobs in this hit production which recently received five Naledi Theatre nominations, including Best Director, Lead Performance in a Play, Production, Lighting and Sound Design. Winners will be announced on 16 May.

ALSO READ: ‘Andile Faku is such a dodgy teacher’: Moshe Ndiki on his role in ‘Gomora’

The media raved about the production, with arts blogger Bruce Denhill describing it as, “profoundly moving and artistically stimulating … their standalone and collective performances here are potent and powerful. See it.”

CityLife Arts was encouraging, saying, “Blood Knot is a play worth seeing … stunning piece of theatre.” De Beer Necessities wrote. “What Fugard does so brilliantly is to thread the sadness of their lives through every breath they take, from start to finish … It is in the simplicity that everything glows … relevant and even more poignant than when they were first written.”

WHAT IS ‘BLOOD KNOT’ ABOUT?

Fugard’s timeless classic, Blood Knot, which tackles themes of brotherhood and hope, first premiered in 1961 and it is as relevant today (if not more so), 61 years later. Set in the suburb of Korsten in Port Elizabeth – a place packed with people who are desperately trying to find an opportunity that will offer them some hope – the play delves into the bond of love between two brothers, the kind that transcends skin colour. They are forced to dream as they navigate the intricacies of being stuck in a place that offers them nothing but its squalor and the poverty that they are confronted with every single moment. Like all great classics, it is relatable and searingly intimate and offers hope in this very delicate conversation with South Africa’s present-day reality.

James Ngcobo is an award-winning actor and director, and the artistic director at The Market Theatre in Johannesburg. Recently he won his fourth SAFTA award for Best Actor for his performance in the Netflix series, Queen Sono. In 2016 he wrote and directed Songs of Migration with the late Hugh Masekela and Sibongile Khumalo as lead musicians and it went on to international acclaim in Washington DC, London and Amsterdam. He adapted E’skia Mphahlele’s short story, The Suitcase, which toured six cities in London. In 2017 Ngcobo and Danny Boyle directed the star-studded children’s charity production, The Children’s Monologues, which premiered in New York and Johannesburg respectively.

“In Blood Knot, Fugard unpacks this country in such a brave manner as he weaves together themes that are still so pertinent in our contemporary times,” explains Ngcobo. “He explores our baggage as a nation in a poetic manner that allows us to look at who we are, what we have gone through and tickles our curiosity about the collective aspirations that we have.”

He continues, “We have witnessed glimpses of hope popping up from the horizon and then jumped back into despair and hopelessness which raises a litany of questions … do we still have the South African dream or is it a South African delusion?”

With several accolades under his belt, Mncedisi Shabangu has wowed audiences at The Baxter for his performances in Tshepang, Fishers of Hope, The Inconvenience of Wings and Marat Sade. This production of Blood Knot is a reunion between Shabangu and director Ngcobo, who collaborated on The Suitcase in 2006 and which won him a Naledi Award for best-supporting actor. He co-created the smash-hit play Gomorrah which opened at the Market Theatre before touring major cities in Sweden.

Francois Jacobs is no stranger to Fugard’s work having starred in People Are Living There at The Market Theatre in 2015 and where he later made his directorial debut in 2020 with Victor Gordon’s Brothers. The University of Stellenbosch BA (Drama) graduate has appeared in numerous films and on television, which includes Binnelanders, 7de Laan and Madiba. He is a regular presenter on the popular magazine programme, Fiësta and was runner up in the first international series, Top Actor SA.

Mannie Manim is responsible for lighting design, Nadya Cohen for props and set, Noluthando Lobese for costumes and soundscape is by Dean Pitman.

Book through Webtickets online or at Pick n Pay stores.