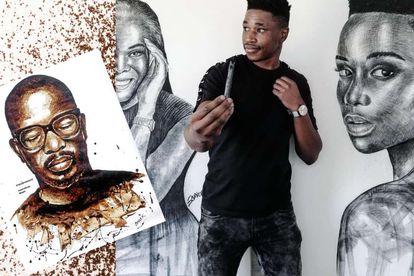 The name of South African artist Ennock Mlangeni went viral after he painted a portrait of DJ Black Coffee using a tin of Ricoffy granules in 2018.

The talented artist now has made international waves as he celebrates his first international solo exhibition in Belgium this week.

From art in a shack to international fame

He posted on Instagram: “First solo exhibition opening today in Belgium. From producing art in a shack to international exhibition”.

The self-taught artist became passionate about his art from a young age. When he was in grade 6, he would draw comic characters and this fuelled his passion for art.

Later, he would spend at least two hours every day at the library researching and reading up on art and artists in a South African and global context.

His rise to fame came with a painting of DJ Black Coffee using a tin of coffee granules mixed with water to form paint. That image went viral.

People started to associate the name Ennock Mlangeni with that of an unique “coffee artist”.

However, this unusual medium came about accidentally. Mlangeni spilt some coffee on one of his paintings while working on it. He saw something beautiful in the spill and that is how he started experimenting with coffee.

‘The butterfly finds its wings’

The exhibition is titled the “The Butterfly Finds its Wings” and is devoted to hope.

Mlangeni lost his parents at a young age and grew up with his grandmother.

He knew the struggles of life even as a youngster, but his message is to never give up. Just as a  butterfly starts as a caterpillar and then evolves into its winged splendour, so his career is evolving as well.

The titles of his paintings in the exhibition also show this message with titles such as Tshepo (Hope), Reinvent Yourself, Hope in Darkness, Fading Hope of a Rainbow Nation, Happiness, Tshepang (Remain in Hope) and more.

Mlangeni wants to one day own his own art academy which could serve as a platform for upcoming artists.