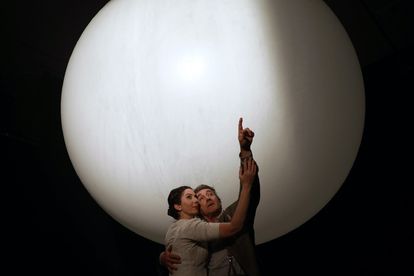 Two of South Africa’s theatre greats, Andrew Buckland and Sylvaine Strike, once again team up to create theatre magic in the stage premiere of Firefly. Directed by Toni Morkel, at the Baxter Flipside for a limited season, the production will be showing from 24 March to 9 April 2022 at 19:30 nightly, with Saturday matinees at 14:30.

ALSO READ: ‘Imbewu’ goes head to head with ‘Muvhango’ and ‘The Queen’ at 9pm

Firefly, under the name of Ferine and Ferase, was one of the flagship productions at the Toyota US Woordfees, showcased on television, DStv Channel 150, in October last year.

According to the statement, The world of Firefly – an unforgettable journey into the underbelly of wonder, in all its awful splendour – is a passionate tale of moon-crossed love, betrayal, revenge and desire.

The exceptional clowning duo, who deliver performances that will move, thrill and delight audiences, are accompanied live by Tony Bentel on piano. Bentel is also responsible for the musical arrangements and some original music.

Renowned theatre and film reviewer and arts writer Diane De Beer described it as one of “magic and mastery”.

“The work that has gone into every second and scene of Ferine and Ferase (Firefly), contributes to a theatrical experience that reels you in and bowls you over. It encourages you to participate heart and soul, introduces you to a fantastic universe that’s both charged and charming, while Buckland and Strike in costume and character, simply steal your heart and hold it tight from start to finish.”

Seasoned critic Marguerite Robinson called it “the kind of theatre experience you only have once in a blue moon, but stays with you forever.”

The production also brings together Morkel, Strike and Buckland. The trio previously collaborated on Tobacco which played to huge success in South Africa and at the Edinburgh Fringe Festival. Morkel was recently directed by Strike in the solo performance of Cottonwool Kid.

Strike is currently receiving great praise for her direction of the modern classic, Kiss of the Spider Woman currently on stage at The Baxter. Other successes in recent years at The Baxter include Endgame, Curse of the Starving Class, Tartuffe, Tobacco and The Miser. In 2019 she was awarded the prestigious Chevalier de l’ordre des Arts et des Lettres (Knight of the Order of Arts and Letters) by the French Government. She is also a former Standard Bank Young Artist for Drama winner and Featured Artist of the National Arts Festival.

Buckland, currently on stage at The Baxter in the critically acclaimed Life & Times of Michael K, has wowed audiences for his performances in Endgame and The Inconvenience of Wings. Both performances earned him Fleur du Cap awards. Other highlights include being awarded three Fringe First Awards at the Edinburgh Fringe Festival, in Scotland.

ALSO READ: No more sand in the hourglass: e.tv drops ‘Days of Our Lives’

Presented by the Baxter Theatre and Toyota SU Woordfees, in association with The Fortune Cookie Company, Firefly runs at the Baxter Flipside from 24 March to 9 April 2022. Ticket prices range from R150 (during the week) to R170 (on weekends) and can be bought online through Webtickets or at Pick n Pay stores.

For discounted block or schools booking, charities and fundraisers, contact Carmen Kearnson at carmen.kearns@uct.ac.za or call her on 021-680-3993.