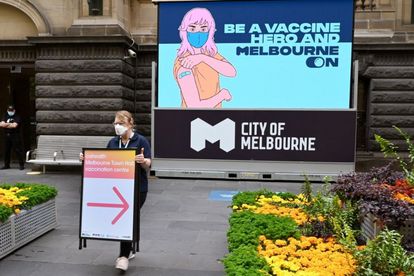 A health worker places a sign outside a vaccination centre in Melbourne on 21 October 2021, ahead of the expected lifting of coronavirus restrictions in one of the world’s most locked-down cities at midnight. Photo: William WEST / AFP

A health worker places a sign outside a vaccination centre in Melbourne on 21 October 2021, ahead of the expected lifting of coronavirus restrictions in one of the world’s most locked-down cities at midnight. Photo: William WEST / AFP

One of the world’s most locked-down cities will reopen late Thursday, with Melbourne residents hoping this sixth bout of stay-at-home restrictions will be their last.

5 million people in Australia’s second-biggest city have endured lockdowns totalling more than 260 days since the beginning of the pandemic.

But now that 70% of eligible people in Melbourne and surrounding Victoria state are fully vaccinated, restrictions that began on 5 August will be lifted.

“I hope everyone enjoys those first reunions with their families, the first footy, netball, cricket training with the kids, the first pot and parma (beer and chicken parmesan) at the pub.”

Half a dozen lockdowns have taken their toll on the once-buzzing city, which prided itself on a vibrant arts scene and cafe culture.

In 2021, it lost the mantle of Australia’s most liveable city amid violent anti-lockdown protests and a small exodus of residents to Covid-free regional towns.

Authorities on Thursday announced a fresh boost to mental health funding and services, in a nod to the burden placed on Melbourne residents.

“Our city’s great because of the people that are here. We would like to see our people back,” he told AFP.

While fully vaccinated Melbourne residents will enjoy increased freedoms from midnight, they cannot leave the city and retail shops must remain closed until the double-dose rate lifts to 80% – likely within weeks.

Limits on patrons at cafes, bars and restaurants will remain in place, squeezing business owners who are also grappling with staff shortages caused by international border closures.

Australia’s ABC News reported on Thursday that Victoria will also lift quarantine requirements for international travellers at the end of the month. Sydney and surrounding New South Wales state are also set to scrap the requirements on 1 November.

While varying rules make it difficult to directly compare lockdowns – Toronto eateries were reportedly closed to diners for more than 360 days while Buenos Aires was under harsh restrictions for much of 2020 – Melbourne has spent among the most days under stay-at-home orders.

Praising the reopening as well as Australia’s soaring vaccination rates, Prime Minister Scott Morrison declared “victory is in sight” in what he described as the “battle of our generation”.

“You’re about to start reclaiming your lives,” he wrote in Melbourne’s Herald Sun newspaper.

“It’s a new chapter, as you begin to open up safely. And stay safely open.”

Australia so far has been spared the worst of the pandemic, recording about 150 000 cases and 1 500 deaths in a population of 25 million.

‘BACK BETTER THAN EVER’

Authorities in Victoria have warned hospitals will likely come under “intense pressure” as a result of the decision to reopen even as Covid surges there, with 2 200 new cases recorded Wednesday.

But after pursuing “Covid zero” for much of the pandemic, Melbourne has followed Sydney’s lead in abandoning the strategy after failing to contain the highly infectious Delta variant.

Tony Kay, owner of Melbourne restaurant CopperWood, said he was confident the vibrant city would “be back better than ever”.

“Even better, as soon as the restrictions are lifted,” he told AFP. “Melbourne is very resilient.”

Proteas star pops the question – and she said YES! He’s a keeper!